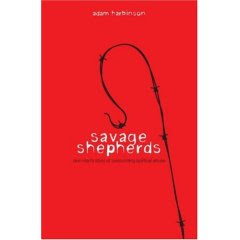 I've several books on the go at the moment. One I've just finished ( Its been around the house for over a decade but I never got round to reading it) is the old classic 'I dared to call him Father' by Bilquis Sheikh, a super story of how a high -born Muslim woman from Pakistan came to know God as her Father. This book perfectly illustrates 'the mission of God' at work, drawing Bilquis to Himself through visions, dreams and supernatural experiences with very little 'human' evangelism involved as such. I'll review it in full later.

Another book I've just finished is 'Savage Shepherds' which tells of the shocking and heart rending story of how Adam Harbinson ( the author) was treated after he left a Christian fellowship in Bangor.
The blurb at the back of the book states:

Adam Harbinson was a respected member of his local church, which was part of the Shepherding Movement in the late 1980's and early 1990's. However when he suspected a deep corruption at the heart of the movement and felt it was time to move on, he discovered powerful forces at work that sought to destroy his family , his health and his livelihood.

This book is really about spiritual abuse which CAN happen in any church or fellowship of any denomination. In a chapter entitled Abuse -Proof your relationship he gives several pointers as to what might constitute an abusive church. These include among others:

There will an attempt to dictate what its members should read, even eat and with whom they should spend their 'off time'.

Members will be discouraged from attending churches from other denominations.

Their will often be the claim, implicit or explicit, that their church or movement has a monopoly of the truth.

The church will be built around a single charismatic character, a self appointed leader with complete authority, usually a self centred and self seeking person.

There is usually a system in place that controls or influences how the members spend their money. Tithing will be taught and enforced, but more, members will be required to tithe exclusively to the group. Anything given elsewhere doesn't count.


There are also commendations by such luminaries such as J John, Bono, Phil Baker and the irrepressible Dr Tony Campolo.I feel this is an important book for those who may be caught up in an abusive or authoritarian church or fellowship.

One of the Marks of Authentic Mission' is that it will set people free from oppressive bonds to serve God, the world and each another: not make children of God slaves. Legalism and and a works mentality has opposed the free grace of God since the begining of creation and been exemplified by the Pharisees and Jesus and refuted most vehemently by Paul in his letter to the Galatians.


It is interesting to note that in 'I dared to call Him Father' it shows how the Lord set Bilquis free from a stern and ever demanding God and led her into the freedom of the children of God while Adam's book tells how a group that started in grace ended up bringing people into such bondage and legalism. As with the parable of the Wheat and the Tares one must surely conclude: 'An enemy has done this'(Matt 13.28).
Posted by Andrew Kenny at 07:50

I'll look for that book as well as the other one you mentioned. They sound very interesting. I am a big reader myself.

Check out "What Jesus Demands From The World" by John Piper.

THanks Scott for your comments.