Weep, weep for those
Who do the work of the Lord
With a high look
And a proud heart.
Their voice is lifted up
In the streets, and their cry is heard.
The bruised reed they break
By their great strength, and the smoking flax
They trample.

For when the Day of the Lord
Is come, and the vales sing
And the hills clap their hands
And the light shines

Then their eyes shall be opened
On a waste place,
Smouldering,
The smoke of the flax bitter
In their nostrils,
Their feet pierced
By broken reed-stems . . .
Wood, hay, and stubble,
And no grass springing.
And all the birds flown.

Weep, weep for those
Who have made a desert
In the name of the Lord.

From Deep Is the Rock 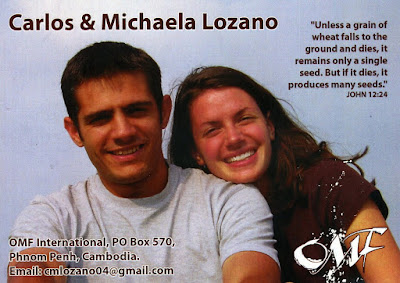 Please pray for my very good friends Carlos and Michaela Lozano who are at present learning the Cambodian language before they go out to serve God in that very needy country.Carlos who is originally from Argentina, met his young wife to be, while serving on an O.M. ship. Michaela who is originally from Germany was brought up by her missionary parents in Japan. They have also both studied at the Belfast Bible College, each gaining a degree in Theology with Michaela taking on an extra year of study to do her Masters degree which she passed in June 08. They also were among the leaders in the Youth Outreach group with myself and others in Belfast, so their going is a great loss to us.

Carlos' many talents include being an excellent magician and being able to walk around on his hands for several minutes! He can also 'put his hand' to almost anything, whether electrical or mechanical, which will prove useful as a missionary. On the other hand, Michaela's gifts include working with children, as well as being a surperb linguist and dramatist.But more than that, they both have a heart of love for God and the lost, and it has been a joy spending time with them.

They will be sorely missed by all who know them in Ireland and we pray that God would protect them from harm and grant them much fruit for their labour in that country. 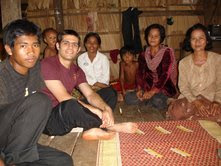 Conversion stories wanted: Do people still get converted in a Postmodern age?

In this post I invite everyone who has had a 'conversion' experience to write about it here! Whether you consider your conversion to have been a process or through a crisis point in your life, it does not matter. It also does not have to be like Mr Spurgeon's as in the previous post, rather, feel free to describe it in your own way, whether in a short paragraph or a much longer piece of writing, as you desire.I would love to here from you.It may also give someone the opportunity to do this for the first time and for others who read it,through your story encourage those who are still 'on the journey to Christ'. Many thanks to all those who have so far told their great story. I will be putting them on as a separate post on my new blog http://storiesofconversion.blogspot.com/
If you would like to participate, just click the comment link,found at the below the last comment made,then write your story.Peace and Grace. AK
Posted by Andrew Kenny at 05:42 17 comments: