Conversations on Being a Heretic.Scot McKnight questioning Brian McLaren about his beliefs.

Q | Conversations on Being a Heretic from Q Ideas on Vimeo.

Brian McLaren's new book 'A New kind of Christianity' has caused quite a stir.After writing several other books including his 'New Kind of Christian' trilogy we find in this new book a more systematic approach to his beliefs. To use the word 'beliefs' however is really a misnomer as McLaren does not really tell you exactly what he believes but rather dances round each of the fundamental Christian doctrines (the Bible, God,Jesus, Salvation etc)in each chapter of his book leaving you in the end more confused than before!This is because he lives in a 'postmodern' bubble in which nothing can be an absolute or dogmatic and no one can truly understand him unless they join him in it.

The evangelical Church comes in for a particularly hard time, being blamed for all that has been wrong with the church. The solution is of course to see things the way he does and if you do, you will become a new kind of Christian much better than the one before.Sadly it will not be really a biblical Christian having written off many of the core beliefs that have been held by faithful Christian believers for 2000 years.

Anyway, this interview should give you a flavour of what he stands for,or rather what he doesn't stand for!We know what Jesus,Paul and all the other New Testament writers believed on major issues. What they taught was clear and unambiguous, there was no waffle- they wrote and spoke with authority. Brian McLaren comes across as a charming man but sadly by not being clear in his teaching he undermines the Bible of whose truth alone shows us the way of salvation. A full critique of 'A New Kind of Christian' by Scot McKnight can be found at http://www.christianitytoday.com/ct/2010/march/3.59.html AK
Posted by Andrew Kenny at 04:43 1 comment:

'You're Frauds'-Hard Words From the Christ!

'Gentle Jesus meek and mild look upon a little child'

I'm sure these words of Charles Wesley regarding Christ are correct in their context. They also are probably the commonly held view of Jesus' character-soft as water,inoffensive,wouldn't hurt a fly type of man. Well the truth is that Jesus would sometimes get 'real mad' with those who were putting on a show, being self righteous or leading the weak astray. However, we as Christians don't like to judge and often quote the verse 'Judge not lest you be judged' as our reason for not doing so. But there is a time when we must speak out, especially when we see evil, and then of course, we should be sure our own heart is right! AK 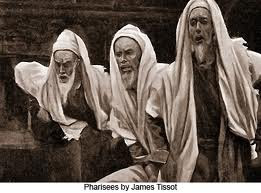 I've had it with you! You're hopeless, you religion scholars, you Pharisees! Frauds! Your lives are roadblocks to God's kingdom. You refuse to enter, and won't let anyone else in either.
"You're hopeless, you religion scholars and Pharisees! Frauds! You go halfway around the world to make a convert, but once you get him you make him into a replica of yourselves, double-damned.

"You're hopeless! What arrogant stupidity! You say, 'If someone makes a promise with his fingers crossed, that's nothing; but if he swears with his hand on the Bible, that's serious.' What ignorance! Does the leather on the Bible carry more weight than the skin on your hands? And what about this piece of trivia: 'If you shake hands on a promise, that's nothing; but if you raise your hand that God is your witness, that's serious'? What ridiculous hairsplitting! What difference does it make whether you shake hands or raise hands? A promise is a promise. What difference does it make if you make your promise inside or outside a house of worship? A promise is a promise. God is present, watching and holding you to account regardless...

"You're hopeless, you religion scholars and Pharisees! Frauds! You burnish the surface of your cups and bowls so they sparkle in the sun, while the insides are maggoty with your greed and gluttony. Stupid Pharisee! Scour the insides, and then the gleaming surface will mean something.

"You're hopeless, you religion scholars and Pharisees! Frauds! You're like manicured grave plots, grass clipped and the flowers bright, but six feet down it's all rotting bones and worm-eaten flesh. People look at you and think you're saints, but beneath the skin you're total frauds.

"You're hopeless, you religion scholars and Pharisees! Frauds! You build granite tombs for your prophets and marble monuments for your saints. And you say that if you had lived in the days of your ancestors, no blood would have been on your hands. You protest too much! You're cut from the same cloth as those murderers, and daily add to the death count.

"You can't squirm out of this: Every drop of righteous blood ever spilled on this earth, beginning with the blood of that good man Abel right down to the blood of Zechariah, Barachiah's son, whom you murdered at his prayers, is on your head. All this, I'm telling you, is coming down on you, on your generation.

"Jerusalem! Jerusalem! Murderer of prophets! Killer of the ones who brought you God's news! How often I've ached to embrace your children, the way a hen gathers her chicks under her wings, and you wouldn't let me. And now you're so desolate, nothing but a ghost town. What is there left to say? Only this: I'm out of here soon. The next time you see me you'll say, 'Oh, God has blessed him! He's come, bringing God's rule!'"
Posted by Andrew Kenny at 15:14 1 comment:

Now Jesus turned to address his disciples, along with the crowd that had gathered with them. "The religion scholars and Pharisees are competent teachers in God's Law. You won't go wrong in following their teachings on Moses. But be careful about following them. They talk a good line, but they don't live it. They don't take it into their hearts and live it out in their behavior. It's all spit-and-polish veneer.
"Instead of giving you God's Law as food and drink by which you can banquet on God, they package it in bundles of rules, loading you down like pack animals. They seem to take pleasure in watching you stagger under these loads, and wouldn't think of lifting a finger to help. Their lives are perpetual fashion shows, embroidered prayer shawls one day and flowery prayers the next. They love to sit at the head table at church dinners, basking in the most prominent positions, preening in the radiance of public flattery, receiving honorary degrees, and getting called 'Doctor' and 'Reverend.'

"Don't let people do that to you, put you on a pedestal like that. You all have a single Teacher, and you are all classmates. Don't set people up as experts over your life, letting them tell you what to do. Save that authority for God; let him tell you what to do. No one else should carry the title of 'Father'; you have only one Father, and he's in heaven. And don't let people maneuver you into taking charge of them. There is only one Life-Leader for you and them—Christ!

"Do you want to stand out? Then step down. Be a servant. If you puff yourself up, you'll get the wind knocked out of you. But if you're content to simply be yourself, your life will count for plenty.