Who are the Dalits?


Cultural Structure
One of the more confusing mysteries of India is her caste system. The caste system, which has existed for more than 3,000 years, was developed by the Brahmin (priest) caste in order to maintain their superiority. Eventually, the caste system became formalized into four distinct classes (Varna). 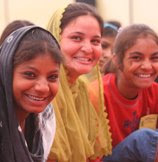 The Brahmins are the highest Varna and are the priests and arbiters of what is right and wrong in matters of religion and society. Below them are the Kshatriyas, who served traditionally as soldiers and administrators. The Vaisyas are the artisan and commercial class, while the Sudras are the farmers and the peasants. It is said that the Brahmin come from Brahma’s mouth, Kshatriyas from his arms, Vaisyas from his thighs, and Sudras from his feet.

A Dalit is not considered part of human society, but instead is considered something less than human. The Dalits generally perform the most menial and degrading jobs. Caste rules hold that Dalits pollute higher caste people with their presence. If higher caste Hindus touch an untouchable or even come within a Dalit’s shadow, they must undergo rigorous series of cleansing rituals.

Approximately 250 million Indians (a full 25% of the population), are Dalit. In a country where everybody is supposed to have equal rights and opportunities, one out of four people is condemned to be untouchable. 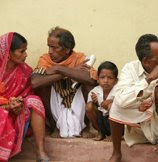 Although the Indian Constitution guarantees fundamental rights and freedoms for all Indians, Dalit are systematically abused. Dalit are poor, deprived and socially backward. Their most basic needs of food, shelter, and safety are not fulfilled. They also cannot access decent education and employment. The systematic denial of their basic human rights results in a lack of education, food, healthcare, and economic opportunity, thereby keeping Dalit in perpetual bondage to the upper castes.


The Dalits represent one of the greatest outreach opportunities for the world Church.They are wanting to be freed from the oppressive caste system.May the Church rise to to task and through prayer and ministry bring them into the freedom that is in Christ.
Posted by Andrew Kenny at 05:41

Yes, brother, this is one of the greatest challenges to the Church today. As we can see, however, the spiritual bondage of India is almost insuperable. Lately the Christians have been suffering martyrdom and persecution in India, as I am sure you are aware. In our "Christian" cultural environments, as secularized as they have become, we still have no concept of what it is like to live in a country completely given over to gods whom our ancestors abandoned more than a thousand years ago. In countries like Japan the bondage to these gods is very subtle and doesn't result in physical violence against followers of Jesus, but it is still there as a wall against us. But in India, the gods still have men in bondage to such an extent, that they cannot even see over the edge; they are in a spiritual black hole.

We have had very little experience witnessing to Hindus, but the one to whom we witnessed the most and at length over a period of several months (he was a business associate from India) seemed to start understanding India from the outside, and began to break out of the bondage little by little. Unfortunately, he has gone back to India and is once again submerged in his religion, which happens to be the Lingayat version of Shaivism (the worship of the god Shiva the Destroyer in the form of his lingam, or sexual organ). Pretty repulsive stuff! One of the arguments our Hindu friend related to best was the comparison of the Hindu gods with gangsters in the human world. We called them gangster gods and explained the methods they use to squeeze people into submission. If our friend Radha ever escapes India, I am sure he will also escape Hinduism, because in his heart he really wanted to know the Truth.

That flag being flown at 3:53 (the one with blue/white/orange/yellow/white stripes) is in fact the international Buddhist flag; many Dalits embrace Buddhism to escape Hinduism and avoid the charge that they've taken money or favors from "Western oppressors and cultural imperialists".