Paul's final words to his prodigy: What can we learn from these today? 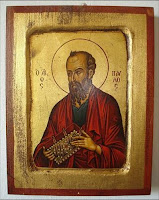 I can't impress this on you too strongly. God is looking over your shoulder. Christ himself is the Judge, with the final say on everyone, living and dead. He is about to break into the open with his rule, so proclaim the Message with intensity; keep on your watch. Challenge, warn, and urge your people. Don't ever quit. Just keep it simple.

You're going to find that there will be times when people will have no stomach for solid teaching, but will fill up on spiritual junk food—catchy opinions that tickle their fancy. They'll turn their backs on truth and chase mirages. But you—keep your eye on what you're doing; accept the hard times along with the good; keep the Message alive; do a thorough job as God's servant.

You take over. I'm about to die, my life an offering on God's altar. This is the only race worth running. I've run hard right to the finish, believed all the way. All that's left now is the shouting—God's applause! Depend on it, he's an honest judge. He'll do right not only by me, but by everyone eager for his coming.

Has Mark Driscoll gone into acting?

Sabretooth preparing to fight in the latest X-men film Wolverine. 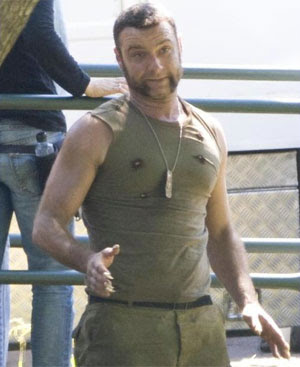 THE FINAL SAY IN THE BOOK OFJONAH: BROTHER ANDREW 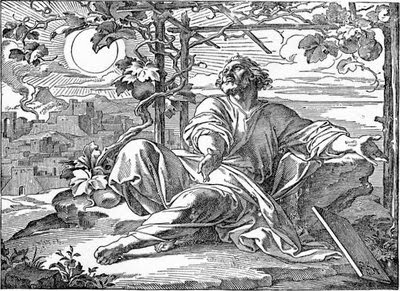 "But the Lord said, 'You have been concerned about this vine, though you did not tend it or make it grow. It sprang up overnight and died overnight. But Nineveh has more than a hundred and twenty thousand people who cannot tell their right hand from their left, and many cattle as well. Should I not be concerned about that great city?'" (Jonah 4:10-11).

God has the final say in the book of Jonah.

Jonah sulks next to the withered remains of a lush vine. The sun is hot. A scorching east wind buffets him. There is no air conditioning. No comfortable sofa to sit on. And Jonah doesn't like the drama playing out in front of him, but he can't change the channel. All he can do is listen to God's voice-over commentary.

But Nineveh can never know of their rights unless Jonah gives up his right to live his own life in his own way.

So whose rights prevail? Jonah can go to the nursery and select another tree to plant for his shade and comfort. But if the Ninevites don't hear God's message, what hope do they have? They are lost!

It's a matter of perspective, and Jonah definitely has the wrong perspective. So God sets him straight.

I think also God desires for Jonah to feel just a little of what God feels for this city. God has compassion for Nineveh. For people who don't know their right hand from their left. Is he talking about the children? Or the mental and physical limitations of Ninevites? Or simply ignorant people? Jonah never asks.

God also has compassion for the animals. They are part of His creation. It was God who told Israel not to muzzle an ox while it is working, which produced Paul's statement, "Does God take care of the oxen?" (I Corinthians 9:9). Jonah, if you don't care for the people, shouldn't you at least care what happens to the animals?

When God stops speaking, Jonah has nothing to say. The book is finished. We are left to wonder about Jonah's reply. Nothing? Is Jonah listening? Is he rebuked and prepared to change his attitude? Or will he sit and continue to pout? Or perhaps he will run away again, turn his back on Nineveh, never pray for them, never follow-up on them to find out if their repentance led to a long-term transformation.

The choice is Jonah's.

The choice is ours.

Today we are left to wonder if we, God's people, will have any compassion for a lost world.
Posted by Andrew Kenny at 02:12 1 comment:

Who will defend Brian McLaren?


I'd be interested to hear your thoughts on this Reformed critique of Brian McLaren. Unfortunately in this discussion no one is here to defend him against these theological heavyweights -Any volunteers?

Or perhaps you agree with their assessment of postmodernism and the Emerging Church.State your case if you like.
Posted by Andrew Kenny at 17:31 6 comments:

Clever dog or what?


This amazing and most enjoyable clip is of a dog who doesn't want to get wet! Can you think of any spiritual lessons that we could learn from this?
Posted by Andrew Kenny at 10:41 6 comments:


Christian theology teaches that we were all there - As Paul declared about himself: 'I have been crucified with Christ'. We all in fact must spiritually die with Chtist on the cross and from that experience something of His new life!
Posted by Andrew Kenny at 04:54 No comments:

May our prayers be with Colin and his family and all in this great society as they reach out to seamen throughout he world.AK


Mark 16:15 He said to them, “Go into all the world and preach the good news to all creation…”
Proverbs 11:30 The fruit of the righteous is a tree of life, and he who wins souls is wise.

150 years ago in Ireland in 1859 revival was the news everywhere. This year the Presbyterian Church in Ireland is encouraging its members to “Awake!” and to engage in both PRAYER AND MISSION. There is a beautiful worship song which says ‘a ship that's in the harbour is still and safe from harm; but it was not built to be there - it was made for wind and storm!’

Since Christmas I have been aboard a few ships ‘stranded’ in Cork because of the recession - the drop in demand has left a backlog of supply. One ship has an especially sad story. It's now been ‘safe in the harbour’ for a couple of months...but it's ‘dead in the water’. It's so sad to see a ship not doing what it was designed to do. The crew weren't being paid and had even run out of food. Eventually the Irish Port Authorities took the ship, repatriated the Ukrainian seamen and plan to sell the ship to reimburse the crew. The crew told me that many people came and took photos of their ship, but few even said hello! The ship's name is Defender, and there was a lot written in the papers about it. I have had lovely times aboard this ship with different crew members over the past 3 years. They have been so friendly and hospitable. The first time I boarded this 40 year old ship I was nervous. The ship is registered in Cambodia and it looked foreboding. I made my way down the steep gangway to the dimly lit mess room. Few at that time on board spoke English, but they told me how their ship had just escaped from a watery grave...it had almost sunk in strong winds in the North Sea and they had all been terrified. They cut their cargo of timber loose into the sea to lighten the ship.... Another time the ship had been arrested as a cigarette smuggler had been found on board, as well as the crew not being paid properly...
Every time I see this ship I imagine how grieved the owners are to have 'lost' their ship. It's not doing what it was designed for - GOING between ports and MAKING MONEY. As I reflected on this I became conscious of how grieved God also must be when we his children do not do as he wants. With the command ‘GO and MAKE DISCIPLES’[1] foremost in my mind I reasoned that just as ships are made to MOVE; to GO; and to MAKE MONEY, the purpose of the Church and of each believer is threefold:

TO BUILD UP – E.g. In Fellowship and Bible Study.
TO REACH UP - Prayer, and Worship, and
TO REACH OUT - Mission, witnessing and evangelism.[2]

It's wonderful to be spending the 150th anniversary of revivals in Ireland encouraging people To REACH UP to God and TO REACH OUT to others in PRAYER AND MISSION. This has been my privilege during my latest deputation during February and March. Thank you for all your prayer support during this time for Sunhwa, Aidan and I. What a joy to be told by a few folk that they pray faithfully for us every day! May God bless you richly! Meeting children (who gave beautiful Christmas presents and letters) and senior citizens (warm and colourful woolly hats etc) who are actively involved in helping us in Cork thrilled my heart! At my meetings I updated (and introduced for the first time in some churches) our mission and ministry here in Cork. In some churches I shared from Psalm 107 (the Seafarer’s Psalm) about the importance of REACHING UP and PRAYER. In others I shared from Jonah about the importance of REACHING OUT and MISSION (and having a heart free from prejudice and racism). God is so good. I never imagined that I would be able to stand in front of people and bring his word to them! With God all things are possible! Give thanks that he can use even me (and even you!)


May God help us to all be like little ships carrying his great news to every creature and every nation.


With love in the Lord,

On 20 March 2009 Shi was due to have his third court hearing but at the last minute the court unexpectedly, and without reason, postponed it. We have just heard that the hearing is due to take place this Thursday, 9 April at 9am (2am BST).

Shi has been in prison since 19 March 2008 and the court has twice rejected the police case against him due to insufficient evidence.

- That this Easter will be one which Shi will spend in freedom, with his family

- Ask God to protect Shi’s lawyer and grant him the wisdom to know how to proceed.

Email me at akevangel@gmail.com if you would like further details about Shi’s situation.
Posted by Andrew Kenny at 12:30 No comments: