The Christian origins of football, George Best, and how I became a Football fanatic!

Kaka from Brazil and perhaps the best player in the world letting the world know he is not ashamed of being a Christian. 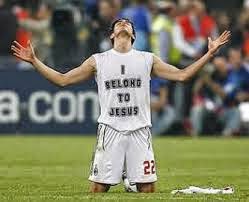 I remember the night I became a football fanatic and a worshiper of the Belfast born footballer George Best, who in his day, was probably the greatest footballer in the world. It was at the end of a perfect day: my Dad and I had just come home from a day’s fishing for trout and we were sitting down to watch ‘Match of the Day’. The year was 1967 and I was eight years old. Manchester United were playing and from the moment my dad pointed out to me the long black haired Man U player wearing the number 7 shirt, and said :'there’s George Best’, my life was to suddenly change.

For the next seven years I was to eat, drink and sleep football. As soon as school finished I would be out practicing with a football or playing football with my friends. At night when I was sleeping I would be dreaming of scoring goals for Manchester United and Northern Ireland, alongside Mr Best! Of course we would score the same amount of goals-at least four apiece! However my first memory of watching a football match goes back to 1966 –the last and only time England won the World Cup. But 1968 stands out clearly in my mind when Manchester United won the European Cup 4-1 against the great Eusebius’ Benfica. Even now I can still rhyme off the whole team! That same year the Belfast part-timers Glentoran, were to only go out of the competition on the ‘away goals rule’ against the mighty Benfica, having drawn 0-0 in Lisbon and 1-1 in Belfast.

I was later to become the captain of the school teams I played for and was fortunate to play for other teams that won several Cups and Leagues. My dad was my greatest supporter and every Saturday used to drive me and many of the other players to our matches! Most of the kids who played alongside me were like myself, and also dreamt of the great glory that would come about when we would play for a top English team and Northern Ireland. One of the best players I did play with was a chap called Noel Brotherson who went on to play for Blackburn Rovers and Northern Ireland. He also managed to score a goal that resulted in Northern Ireland winning the Home International Championship which included the English, Scottish and Welsh national teams! Sadly Noel was to later die as a relatively young man.

During the period when I was beginning to think about spiritual things (I had become a Christian in 1974) I remember the night I became totally disillusioned with ‘the beautiful game’. It was the 1976 European Cup Final between Bayern Munich and the French team Saint Etienne, and though the French were the better team, having pressed their German opponents the whole match, Munich scored the one and only goal on a break away. My conclusion after the match was that if this was the best Football in Europe I was going to give up watching it-and I did! It had been a god in my life for a good seven years but from that time it was dead to me.

However in the last ten years I have started to enjoy watching it again –but now I will never get upset if a team I like fails to win-unlike before! I actually enjoy watching most teams and if it is a good match even enjoy seeing my team being beaten! In moderation I think football can be enjoyed and talking about it is often a good ‘ice breaker’ when getting to know young people in a Youth group setting which I am often involved with. I was therefore pleasantly surprised to discover its Christian origins and how it was often used in its early days to get young people off the street, to stop them fighting or to discourage them from getting drunk at weekends. Sadly it is perhaps ironic that it was alcohol that was to take the life of George Best, who through years of heavy drinking had become a chronic alcoholic. When my son took on a part time job with a local security company, his first assignment with them was to work as a steward at the massive funeral that took place for George in his home city of Belfast.However I also have it on good authority that before he died he had made peace with God!


Youtube tribute to George Best: the greatest player in the world of his generation.

The article below by Stephen Sizer on the Christian origins of football borrows much information used by Dave Roberts in his longer article in found in Christianity Magazine.AK


For some, football is their life, indeed it is their god. Their football pitch is hallowed ground. Apart from the bathroom, it is the only other place on earth where they will sing at the tops of their voices.

Many think that Church and football are in competition. Comparisons are common, although Sunday church attendance in Britain still far exceeds Saturday football attendance, its just you would not know it given the pages devoted to football in the Sunday newspapers.

Dave Roberts has written a brilliant article in Christianity about the origins of football in the UK, showing the profound impact local churches had in the formation of many of the leading clubs of today.

The association between Church and football is actually much closer than most people realise. As organized football grew throughout the 1860s and 1870s, it was actually church based teams which took the initiative to form the Football League in 1886. Tired of friendlies against inferior local opposition and the occasional thrill of the cup, William McGregor of the Aston Villa (Wesleyan) Football Club decided to see if there was interest in a league structure. Ten of the other teams joining Villa during that first decade of the league were church affiliated, with Methodists and Anglicans at the fore.

One of the founders, HS Yoxall, found large numbers of young men playing football on Sundays. He persuaded them to come to Bible class and provided a field for them to play on, on Saturdays. The same mission started cycling, rambling and angling clubs, and offered classes in arithmetic, writing, shorthand and music. They had a gymnasium, games room, lounge, library and refreshment bar. As this distinctive mission work went on, the Aston Villa (Wesleyan) Football Club grew from humble beginnings in 1874 to winning the FA Cup in 1887. McGregor had worked hard to curb the drinking of team members, and called a team meeting every Monday in a local coffee shop to help the players discover other social outlets.

John Henry Carwell, the vicar of St Andrews in Fulham, turned to the then 15 year old Tom Norman to recruit players for what became Fulham FC. He felt people needed to belong before they could believe. The church fed 160 poor local children daily with free hot dinners, while at the same time opened a gym to encourage fitness and sport. Southampton FC, similarly was founded by the curate of St Mary’s Church in the town.

Two other notable clubs founded by parish churches were Barnsley and Manchester City. Vicar’s daughter, Anna Connell started a men’s club at St Mark’s, West Gorton with around a hundred local young men to dissuade them from organised fighting. A football club was formed to help ‘deepen the bonds’ between them. The first match in 1880 of the team that would become Manchester City was against Macclesfield Baptist.

Queens Park estate in West London was another community in which the church initiated a football team. Christ Church Rangers eventually became Queens Park Rangers. Tottenham Hotspur similarly grew out of a young men’s Bible class at All Hallows, Tottenham. And teetotal Everton players associated with St Domingo Methodist Chapel actually provoked the formation of Liverpool FC when a small number of members formed the new club on Everton’s old ground at Anfield following a dispute over alcohol.

So maybe the Christian origins of the Street Child World Cup that has preceded the World Cup in South Africa should come as no surprise after all.
Stephen Sizer
http://www.stephensizer.com/2010/06/for-god-and-football/

With grateful thanks to Dave Roberts for his article, Aston Villa and the Mission of God in Christianity (June) 2010.
Posted by Andrew Kenny at 07:30 No comments:

"In the world ye shall have tribulation." John 16:33 Spurgeon

Are you asking the reason of this, believer? Look upward to thy heavenly Father, and behold him pure and holy. Do you know that you are one day to be like him? Will you easily be conformed to his image? Will you not require much refining in the furnace of affliction to purify you? Will it be an easy thing to get rid of your corruptions, and make you perfect even as your Father who is in heaven is perfect?

Next, Christian, turn your eye downward. Do you know what foes you have beneath your feet? you were once a servant of Satan, and no king will willingly lose his subjects. Do you think that Satan will let you alone? No, he will be always at you, for he "goes about like a roaring lion, seeking whom he may devour." Expect trouble, therefore, Christian, when you look beneath.

Then look around you. Where are you? You are in an enemy's country, a stranger and a sojourner. The world is not your friend. If it be, then you are not God's friend, for he who is the friend of the world is the enemy of God. Be assured that you shall find enemies everywhere. When you sleep, think that you are resting on the battlefield; when you walk, suspect an ambush in every hedge. As mosquitoes are said to bite strangers more than natives, so will the trials of earth be sharpest to you.

Lastly, look within yourself, into your own heart and observe what is there. Sin and self are still within. Ah! if you had no devil to tempt you, no enemies to fight you, and no world to ensnare thee, you would still find in yourself evil enough to be a sore trouble to you, for "the heart is deceitful above all things, and desperately wicked." 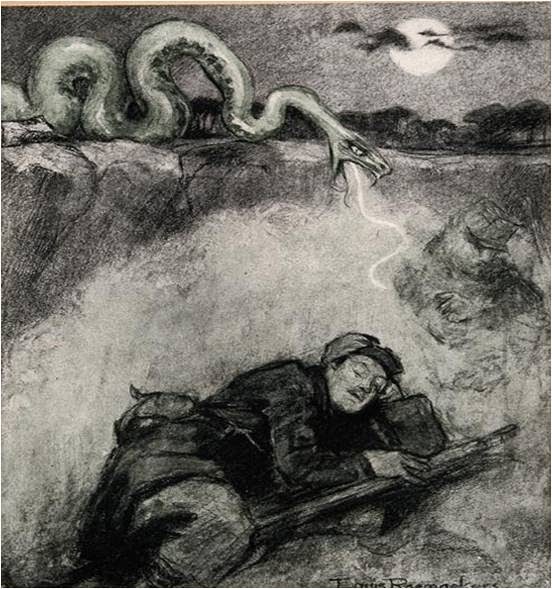 Expect trouble then, but despair not on account of it, for God is with thee to help and to strengthen you. He has said, "I will be with you in trouble; I will deliver you and honour you."
Posted by Andrew Kenny at 03:46 No comments: