Philip the Evangelist: A man filled with the Holy Spirit 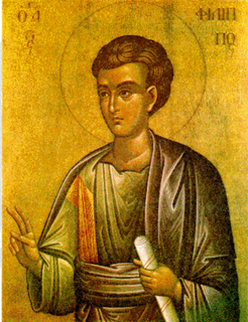 Both Philip and Stephen were among the first deacons in the first Church in Jerusalem that were marked as being full of the Holy Spirit and wisdom. Stephen became the first martyr and Philip became the first Christian who was known as an evangelist. He was a married man and Acts records that he had four daughters who were all prophetesses (Acts 21.9).

Things had not being going well for the Church as they were under immense pressure from the Jews primarily led by Saul. Nevertheless as Tertullian the early Christian writer wrote: The blood of the martyrs is the seed of the Church'.

It was the banishment of Philip from his hometown that resulted in many Samaritans finding Christ and it proved to be that the death of Stephen resulted in the salvation of Saul and his great witness to the Gentiles. We must therefore never underestimate what God through his Spirit may be doing 'unseen' in disappointments or outside pressures that we have no control over. God may actually, in love, be forcing us out of our comfort zones in order that He may use us in ways we never imagined. We must therefore always refer back to Him with the prayer: 'Why is this happening',what are you saying to me in this situation', or as Paul said after his confrontation with the risen Christ when he lost his sight: 'What would you have me to do.'

It might not always appear to be significant but at the very least it would mean drawing close to Christ for succour and help in such a time of need (Hebrews 4.16). I sometimes wonder why Paul ended in prison so often, perhaps the Lord wanted to minister to him and allow him time to pray and reflect-and write.

Stephen was not only an evangelist but also had the gift of miracles being able to heal the sick as well as cast out demons. In Samaria we see Philip as a sort of mass evangelist (Acts 8.4-25), but we also see him as a personal evangelist when he deals with the Ethiopian eunuch ( v 26-40). In God's dealing with the latter it reveals to us his concern for the individual and how he will use his servants to reach those individuals.

The first mission to Samaria seemed to be almost forced upon Philip and others through the onslaught of persecution. Philip's mission to the eunuch would appear to have been more directive with 'an angel of the Lord' directing him to a certain area where he would meet a prominent member of the Ethiopian government. There are perhaps times when the Spirit moves us and speaks to us more clearly than other times. Certainly if we are not open to Him speaking to us we are less likely to hear.

How does God speak to us today? Have you heard Him speak to you recently through his living word or through a sermon or book or even through 'a still small voice' from within? In the first lecture we saw that Jesus had an intimacy with the Father and did only what he saw his Father doing. He also said that his sheep knew his voice. It is through the experience of listening to him, then stepping out on his word that will teach us to discern the Shepherd's gentle voice from the Adversary's lies.

In the instance with the eunuch, Philip does not need to rush or push too hard to discover that God has opened up the wonderful opportunity to witness. The eunuch was reading Isaiah 53 out loud which was how they read in those days (Stott).He was at least 'a God Fearer' if not a Jewish convert and had just been to Jerusalem to worship. Philip asked him if he understood what he was reading and was then invited on to the chariot to explain the meaning of the passage. Then Philip 'beginning with this Scripture he told the good news about Jesus.' Philip didn't have his pet verses or his 4 Spiritual laws that he had to impress upon the eunuch, but rather started where the seeker was and from that explained to him the way of salvation. The result was that the Eunuch believed and wanted to be baptised! After he baptised the eunuch his work was then done. Philip was then called away to preach and minister in other areas. The eunuch armed with spiritual food 'went on his way rejoicing'.

What lessons can we learn from Philip?

1. Experiencing difficult times in forcing us out of our comfort zone can provide opportunities for us to witness for Christ. Would Philip have preached to those in Samaria and later to the Ethiopian otherwise?

2.Philip by listening to God was open to what the Spirit was doing. Have you ever felt God speak to you in regard to moving out of your comfort zone?

3.Philip was prepared to preach to the Samaritans who were half Jew, half Gentile and saw great fruit. Would we be prepared to speak to those who are different from us?

4. The Ethiopian eunuch had been spiritually prepared for Philip by the Holy Spirit. Have you met people that are 'not far from the kingdom' who only need an encouragement or word of invitation to become a disciple of Christ? In this situation little sowing is required but the important work of reaping certainly is.

5. Paul encourages us to be filled with the Spirit continually. When was the last time we asked God for more love, more power, more of the Spirit in our lives?

6. Jesus declared that they would receive power when the Holy Spirit came upon them and they would be his witnesses in Jerusalem, in Judea and Samaria and to the ends of the earth (Acts 1. 8.). Where is your Samaria?

' On the last day of the feast, the great day, Jesus stood up and cried out, "If anyone thirsts, let him come to me and drink. Whoever believes in me, as the Scripture has said, 'Out of his heart will flow rivers of living water.'"

Just curious...how do you know Philip was married? I know we're told he had four grown daughters, but can you be certain he was married?

I am preparing a sermon on Philip this week and was wondering if you had read anything decisive about that.

The presumption is that Philip was married to a Godly woman because their marriage, and faith, resulted in birth and upbringing of four virgin daughters that were prophets! Philip was "one of the seven," or deacons, and as Paul wrote in 1 Timothy 3:12, "Let the deacons be the husbands of one wife, ruling their children and their own houses well."

Thanks Jed for your kind comments.